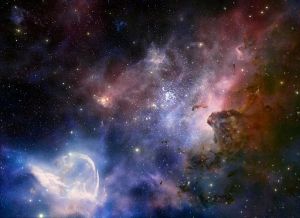 Beautiful, but not perfect

I was recently watching a documentary by Stephen Hawking called Into the Universe, and there was a line in it that really struck me. He said “there is no such thing as perfection.” In fact, the creation of the universe was reliant on that fact – if all matter had been perfectly geometrically scattered after the Big Bang, then none of it would have started to clump together to form the beginnings of stars and planets. Everything would have remained in a perfect state of geometry, all pieces of matter equally distant from the next, balancing all gravitational pull. Hawking goes on to say

So next time someone complains that you have made a mistake, tell him that may be a good thing. Because without imperfection, neither you nor I would exist.

It’s not such a radical idea I know. We all say “nobody’s perfect”, but having the very notion of perfection presented as something imaginary, that cannot be found anywhere in the universe, is something that speaks to my annoying perfectionist side.

I’m not a perfectionist about everything – one look at the state my house is in most of the time can tell you that. But I can be hard on myself when I make mistakes. I have even been known to avoid a situation rather than risk making mistakes or making a wrong choice. I am much more comfortable in my familiar academic territory of researching a subject, learning the theory and then trying to apply it, in a perfectly ordered, structured way. And then I had children.

Parents often say “babies don’t come with a manual”, but you know if they did, I would have read it cover to cover, underlining important passages! Nothing slings you in at the deep end like having a baby (or, in my case, two.) For all my baby-book research beforehand, I was utterly clueless when it came to the reality of parenting. Everyday you are faced with the multiple mistakes you make – the only way to learn is trial and error. Not an easy thing for a perfectionist. Any time my babies had too much wind, or didn’t feed well, or vomited, I agonised over what I must have done wrong, and was frustrated that I hadn’t found the right answer. And then finally, just as I would start to feel as though I had got the hang of something, they would insist on growing and developing which meant I had to start from scratch again, learning something new, like weaning or potty-training. At each new stage I was clueless once again, making countless mistakes, feeling like I was making it up as I went along.

My children are six now, and my role as a parent has changed significantly over the years. The balance starts to shift at this age from mainly seeing to their physical needs, towards dealing with emotional and psychological needs. And one of these issues is helping your child learn to learn through their mistakes. You don’t want your children to be perfectionists (perfectionism is, after all, an imperfection!) and you don’t want them to feel bad about making mistakes. I am acutely aware that children learn primarily by example, and if they see me upset by my mistakes, or worse still, impatient with their mistakes, they will feel inhibited to try something new for fear of getting it “wrong.”

Luckily I’ve had six years to get used to making mistakes of my own, and in many ways I have also learnt from my children. I’ve watched them have to learn every single one of their skills through trial and error – after all, no baby comes out of the womb walking, talking and dressing themselves. I have admired how they didn’t give up until they could crawl towards the forbidden electric cables, pick up and swallow that tiny piece of muck, and take my best pair of shoes from my wardrobe and put them on their own little feet. Each one of those was a personal achievement which they never would have managed without practice and patience. Learning through our mistakes is something we are all born innately to do, in order to achieve the many skills we take for granted. I don’t think many of us would blame a toddler for falling over on his 2nd step, or mispronouncing a word; we all know it takes a lot of practise to walk and talk. In fact we often find the mistakes along the way quite entertaining. This is something us perfectionists need to remember when trying to achieve the more complex skills we, and our children, strive for later on.

So what can I do to not inhibit my children’s natural instinct of trial and error, or to mitigate any part of them that may be naturally perfectionist? When I feel I’ve made a mistake, I now try to ask myself afterwards, “What should I do next time that happens?” And then try to stick to it (that’s the hard part!) I don’t hide my mistakes from my children, I tell them when I think I did something wrong, and explain what I think I should do instead next time. I apologise to them if I think I’ve been hard on them for something they didn’t deserve. Initially I thought “Will I damage their image of me if I admit I did something wrong?” but I think what I am doing is giving an honest account of being a grown-up, and being human. We make mistakes, we sometimes make a lot of them, but it’s how we deal with them that counts. And of course, I encourage them to stick at something even if it’s hard and I try not to be impatient with them for not showing speedy improvement.

I still make plenty of mistakes. I wish I were more patient when my children are incredibly slow at getting ready for school. I wish my first thought when something gets spilt or broken wasn’t “why can’t they be more careful!” The main difference now is that I realise there is no such thing as a perfect parent. The best I can hope for is to keep learning to learn from my mistakes, so that I’m not constantly making the same ones, but rather coming up with new mistakes all the time.

So next time you strive for perfection, don’t; the Universe depends on it.

My Tweets
Join 247 other followers